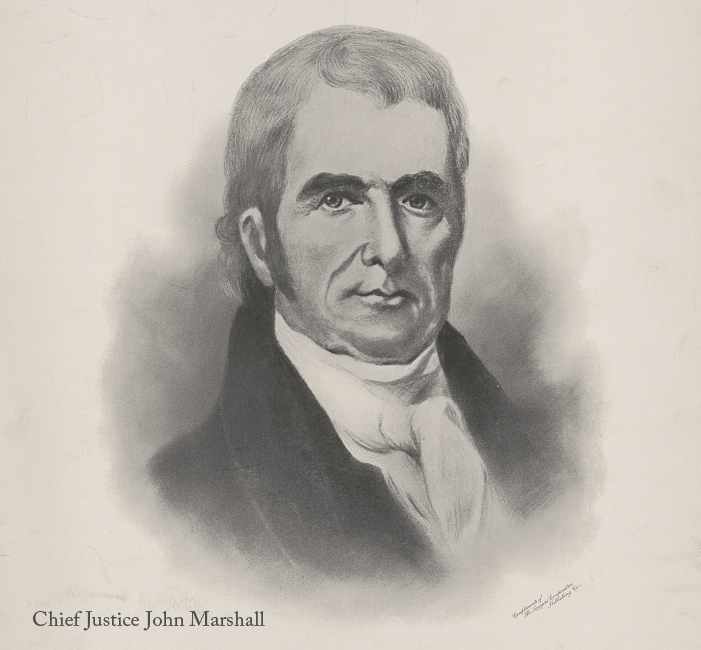 What Is ‘Free Enterprise’?

Chief Justice John Marshall presided over the US Supreme Court from 1801 to 1835. Marshall’s opinion in Fletcher v. Peck in 1810, which focused on the Constitution’s contract clause, had a profound role in shaping the character of the US economy. This decision served to enshrine free enterprise and preserve the sanctity of contracts and private transactions.

His opinion in Fletcher was written in a period of “aggressive nationalism” (in the words of history professor Richard E. Ellis) on the Court. While the decision had a salutary effect on free enterprise, it also affected the course of American federalism.

In 1795, the Georgia legislature sold 35 million acres of land in the state’s western territory, then known as Yazoo (now Mississippi and Alabama), to a group of four private land companies. The sale price was a colossal bargain: less than 2 cents an acre.

The land companies in turn divided up the tracts into parcels and sold them off to second-tier investors, including smaller land companies and individuals in several states. A number of northern speculators banded together as the New England Mississippi Land Company and bought some of the parcels from the original land companies.

There was one problem. Most of the Georgia legislators who voted for the 1795 land-sale legislation had been bribed by first-tier investors to sell the land at a preposterously low price. When Georgia voters learned of the massive Yazoo scandal, they responded by replacing many of the corrupt legislators in the 1796 election, and the new Georgia legislature promptly rescinded the 1795 act, annulling the land sale. Title to the Yazoo lands was restored to the state. Seven years later Georgia ceded Yazoo Territory to the national government. This did not bother the first-tier land companies much, because they had already made huge profits selling parcels to second-tier investors. The second- and third-tier investors who now held annulled titles to Yazoo land were the real victims of the scandal.

John Peck, a Boston speculator, was one of the third-tier investors who bought some Yazoo land from the New England Mississippi Land Company in 1800. In 1803 he sold 13,000 acres of his holdings to New Hampshire investor Robert Fletcher for $3,000. In the sale contract, Peck explicitly stated that his title to the land was sound. Almost immediately, Fletcher sued Peck for breach of contract, claiming Peck’s title to the land had been worthless due to the 1796 act rescinding the original sale of Yazoo land, and demanding his money back.

In Peck’s defense of the lawsuit, he asserted first that Georgia’s 1795 sale was a binding contract between the state and the land companies, the underlying fraud notwithstanding. Peck’s defense further asserted that the 1796 rescinding act was unconstitutional because it “impaired the obligations” of the 1795 contract, in the violation of Article 1, Section 10 of the Constitution, known as the contract clause. The contract clause states:

No state shall…pass any Bill of Attainder, ex post facto Law, or Law impairing the Obligation of Contracts, or grant any Title of Nobility.

If the 1796 rescinding act was unconstitutional, then the titles that both Fletcher and Peck held should still be sound and, therefore, valuable.

Fletcher’s lawsuit failed at the federal circuit court in Boston. That is, the court agreed with Peck’s argument that the 1796 rescinding act impaired a contract and was, therefore, unconstitutional. The reasoning behind the court’s decision was this:

Peck’s title to the Yazoo land was, therefore, sound when he purchased it in 1800 and when he sold part of it to Fletcher in 1803, and the defendant Peck had, therefore, not breached his agreement with the plaintiff Fletcher.

Fletcher appealed to the US Supreme Court. Fletcher’s lawyer, Luther Martin, was one of the framers of the Constitution. Peck’s legal team included future President John Quincy Adams and future Supreme Court Justice Joseph Story. The high court ruled in 1810, in the landmark case Fletcher v. Peck, that Georgia’s rescinding act did violate the Constitution’s contract clause, as Peck had asserted in his defense, by “impairing the obligations of” the Yazoo contract. So although Fletcher lost the case, the titles to Yazoo land that he and Peck held, even though the Yazoo land was now national property, should, as a matter of justice, still be valuable.

The US legislature eventually approved a payment to all title-holding victims of the Yazoo scandal.

It is almost certain that Fletcher and Peck both knew about Georgia’s 1796 rescinding act when they made their deal in 1803, and they colluded to bring the lawsuit to court in the interest of all New England Mississippi Land Company investors. It is likely that Chief Justice John Marshall was aware that the lawsuit was collusive when he wrote the Court’s opinion in 1810 in Fletcher v. Peck. Nevertheless, Fletcher was the first in a series of contract clause decisions in the high court that elevated business transactions and vested property rights to a sanctified status and protected them from arbitrary actions of state legislatures. Such protection gave entrepreneurs and investors reasonable assurance that once they risked their capital on a venture, their chances for a return would not be thwarted by corrupt or even well-meaning politicians. If the obligations of contract could be impaired by the legislatures, “all titles would be insecure, and the intercourse between man and man would be very seriously obstructed,” Marshall wrote in his opinion.

Free enterprise was already baked into the American economy in the early 1700s. Free-market capitalism was essentially imported from Britain and evolved in a loosely regulated confederation of colonies and then states after the War of Independence. But not one of the founding documents — the Declaration of Independence, the Articles of Confederation, the Constitution, and the Federalist Papers included — mention free enterprise or free markets. The Fletcher decision is the closest thing we have to official establishment of free enterprise. It was followed in 1819 by the Marshall Court’s derivative decision in Dartmouth College v. Woodward, which extended the protection of contracts to the protection of corporate charters from state interference.

The Marshall Court’s decision in Fletcher v. Peck, though a boon to private enterprise, represented a threat to Jeffersonian states’ rights advocates. By asserting jurisdiction over Georgia’s affairs and striking down a state law for the first time (the Court had struck down a federal law for the first time seven years earlier in Marbury v. Madison), the Marshall Court was perceived by Jeffersonians as consolidating power in the national government at the expense of state sovereignty. The Constitution, after all, had created a federal structure where sovereignty was divided between the national government and state governments so that no unit of government would accumulate so much power that it could become tyrannical.

The fear that the national government was exercising too much power had been aroused immediately after the new government was launched when Treasury Secretary Alexander Hamilton created the nation’s financial system in 1791. Hamilton’s plan involved national assumption of state debts, funding the national debt, and establishing a central bank.

The Supreme Court decision in Fletcher, along with its derivative Dartmouth College, guaranteed free enterprise by protecting vested property rights, contracts, corporate charters, and private transactions from government interference. The Marshall Court’s later decision in Gibbons v. Ogden (1824) assured the national government’s supremacy in regulating interstate commerce, barred states from inhibiting the stream of commerce across borders within the union, and favored competition over state monopolies.

The Constitution does not further restrict the government, at least not explicitly, from regulating or participating in the national economy. Article I, Section 8 of the Constitution – specifically the “necessary-and-proper” clause, as interpreted in the 1819 Supreme Court decision McCulloch v. Maryland – gives government the power to create institutions such as a central bank, now known as the Federal Reserve Board, to stimulate the flow of capital investment and effectuate a unified monetary policy. This sort of government participation is consistent with free enterprise, in my opinion.

A broad interpretation of the commerce clause by federal courts, starting with Gibbons vs. Ogden, has been the constitutional basis for civil rights legislation, environmental and worker protection laws, and financial regulation. It continues to generate controversy regarding the extent of the national government’s reach into the commercial (and other) affairs of the nation.

Some libertarians assert that “free enterprise” implies the near-absence of government regulation from commerce and industry, as well as little or no personal income tax. In other words, “Get government out of our way, and let a purely free market decide what’s best for society.” Some professed libertarians are little more than self-serving industrialists who want the freedom to pollute air and water (and a few of them in the energy and agriculture sectors actually benefit from government subsidies). But many libertarians sincerely believe that a largely unfettered economy is the most efficient way to produce goods and services that people need at the lowest cost, allocate capital judiciously, and provide employment to the people who want to work. They may or may not be right about that.

The Marshall Court’s decision in Fletcher vs. Peck, coming in the early years of the American republic, addressed one most important political issues of the time, the struggle between Alexander Hamilton’s vision of an American empire based on industrial, commercial, and military preeminence; and Thomas Jefferson’s agrarian vision of limited, decentralized government. The former depended on strengthening the unifying power of the national government in the early 1800s, while the latter aimed to preserve the sovereignty of the states and guard against tyranny that would presumably result from vesting too much power in a central authority.

In Fletcher and later Marshall Court decisions (especially McCulloch), Marshall and the other Federalist justices expanded the authority of the national government at the expense of state sovereignty.

James Madison, a principal framer of the Constitution and fourth President, although a Republican, believed that strengthening the power of the national government was essential to preserve liberty, especially with respect to minority and individual rights.

Such issues, which first took center stage in the national debates over ratification of the Constitution in 1787 and 1788, still occupy minds today, and if the American republic is to endure, always will.