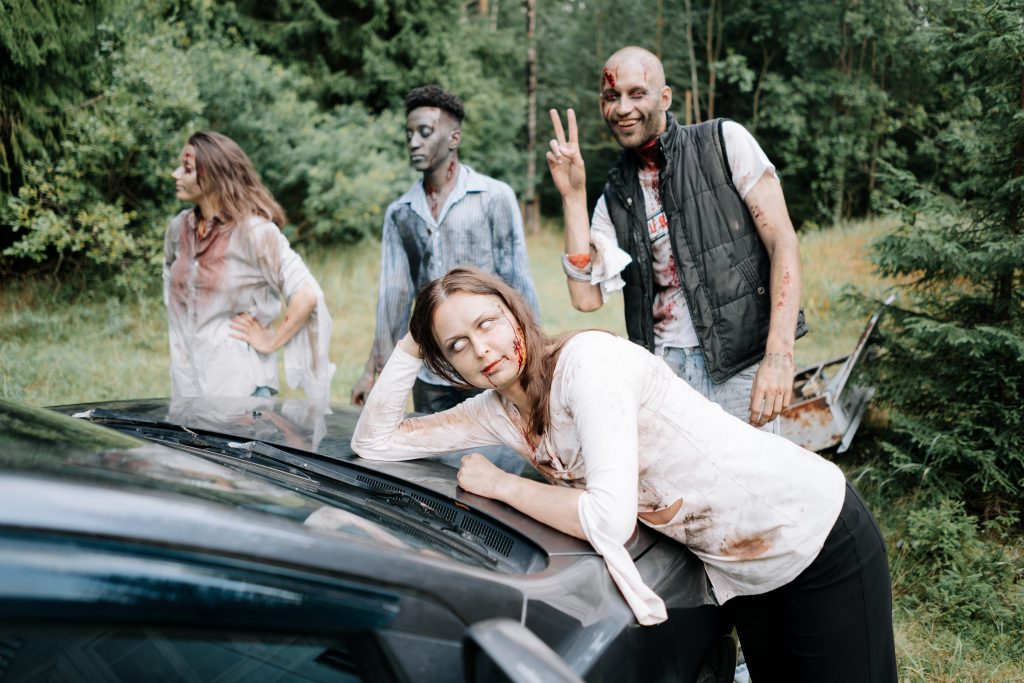 It’s Halloween time, which means all sorts of ghosts and ghoulies are en vogue. It’s also peak season for The Walking Dead fans. If you’re not familiar with the show, it’s a post-collapse narrative of a world in ruins and overrun by zombies.

Now, if you are a Walking Dead fan, there are a few things you already know:

Ok, there are probably a lot more fans who could discuss and debate at length (especially if we’re talking about story quality in the last several seasons). But on top of teaching us about the perils of the undead and the best ways to make them stay dead, the show also provides an important lesson you may have missed amid all the gore and guts and poor decision-making.

Green technology is not just an environmentally friendly power source. It is — zombies or no zombies — necessary to our survival. And for investors, that’s some of the best advice you can get from a post-apocalyptic hellscape.

In the fifth season of The Walking Dead, our motley crew of survivors have ducked, dodged, and dismembered their way to a seeming Utopia known as Alexandria. It’s a nearly pristine community of furnished homes, stable governance, and armed citizens who have built a fortress around their time bubble of a home.

How? In a world where the grid long since failed, Alexandria is powered by renewable energy and a sustainable distribution system to match. And electricity makes all the difference — from being able to power tools to help grow food, to being able to store refrigeration to store it, and in too many ways to enumerate here.

We here at Financial Poise aren’t much for wild gambles, whether it’s stock picking or predicting when the end of the world is going to arrive. It is not a roll of the dice, though, to say that it shouldn’t take a zombie apocalypse for a real green revolution to take hold. Not if we want to survive.

The Scale of the More Likely Apocalypse

It is no longer a debate. Climate change is real and dangerous. Scientists agree. So does Mother Nature with her ramped-up track record of catastrophic natural disasters, resulting in excess of over $1 billion in damages in the U.S. alone. Moreover, a 3.2 degree Celsius rise in global temperatures by 2050 is expected to wipe out 18 percent of total global GDP or $23 trillion.

And beyond the measurable climate impact of human pollution, there are demonstrable public health concerns. Climate has been known to affect human health since the time of Hippocrates.

A refusal to make substantial investments in green energy along with failure to address crumbling infrastructure is increasingly resulting in mortality from cardiovascular and respiratory diseases. The potential health effects of climate change have been extensively studied, and some of the principal concerns, to name a few, include injuries and fatalities related to severe weather events and heat waves; infectious diseases related to changes in vector biology, water, and food contamination; allergic symptoms related to increased allergen production; respiratory and cardiovascular disease related to worsening air pollution; and nutritional shortages related to changes in food production.

This doesn’t even touch on the damage done by fuel extraction. Whether you’re talking about oil spills or the destruction of mountains and water tables in pursuit of more coal, we’re hurting ourselves gravely at every turn. Even natural gas, despite being billed as a “cleaner” alternative to fuels like coal, poisons groundwater and endangers wildlife during fracking.

This is not to say that green energy production has been perfected. Hydroelectric energy can disrupt aquatic ecosystems. Mining silicon for solar energy creates pollution, as well. Wind turbine farms add to land use-related carbon emissions that already account for 24% of all carbon emissions globally. Nuclear plants present dangers that have already been horrifically observed. Poor understanding and regulation of all of the above up the ante.

And this doesn’t even take into account transportation emissions. Conventional cars contribute 27% of carbon pollution in the U.S. Electric cars, despite lower gasoline consumption, generate significant carbon pollution during charging, to say nothing of what goes on with their batteries. Even if you believe the trade-off is still a net benefit, their adoption rate has been too small to make a big enough dent due to their cost and the availability of charging ports.

We’re not trying to be scarier than the plot of The Walking Dead (even if we think climate change is scarier). We’re just stating the facts. The good news is that the climate apocalypse is avoidable.

Green Tech to the Rescue

In recognition of mankind’s enormous impact on the planet, scientists have coined a new geological epoch known as the “Anthropocene.” This era has and will continue to have, man-made climate change as its most prominent feature. As the ushers of this new era, humans have a responsibility to stem the tide, specifically, halting the activities that drive environmental degradation. Companies can contribute by changing the way they do business and as an investor, you can influence a positive change in behavior.

Climate change will not be felled by Michonne’s swords or Neegan’s club. Fortunately, people increasingly understand the need to combat climate change, governments across the planet are finally embracing the need, and companies- large and small, old and new, are rapidly developing and commercializing new technology that will affect positive change of massive proportions.

New technology requires investment. And successful commercialization of new technology results in profit. But not every green tech will pan out. And even for those that do, not every company pursuing successful green tech will succeed. In fact, if the past is a precursor, most will fail, as has always been true of most companies in any industry (did you know that more than 1,8000 auto manufacturers were founded in the U.S. before 1930?).

However, in spite of a few inevitable failures, the green tech market will eventually make a lot of people a lot of money. As an example, despite the setbacks in the early 2000s, the solar power market has grown 10x since 2010, reaching $130 billion per year as prices have fallen by 85%, and the wind power market has quadrupled to over $60 billion while costs were cut in half. The global sales of electric vehicles more than doubled from 2020 to 2021 and may exceed 10% of new car sales in 2022.

There will also be many “green tech investment opportunities” that claim to be a ‘green tech’ play that are not really what they claim to be (the applicable term of art is greenwashing). Do you remember when it was en vogue for companies to add .com to their names for a quick boost in stock price? Same concept. Joe Pinsker wrote in The Atlantic about that in The Once-Upon-a-Time Magic of Adding ‘.com’ to a Company’s Name. Learn how to avoid these and invest for the long term.

The future of humanity depends on adapting to climate change, and investors are rising to the occasion. Increasingly, the economy will be dominated by climate technologies, which will affect everything from housing to transportation to food supply and even military operations. Just as fossil fuels have been for the past century, these green technologies will become an important driver of geopolitics, economics, and national security.

Editors’ Note: Want to learn more? Attend (live or virtually: Earning Green by Investing Green – A Symposium About Investing in the Environment – an all-day event.

The event will take place December 8th and will last all day. Attendees will also receive access to view the event on demand. Tentative topics are:

You may also enjoy reading:

Hajar Jouglaf is an attorney with Much Shelist, P.C. where she is a corporate attorney who represents clients throughout the business lifecycle. She counsels both healthy and distressed businesses as they pursue new goals and overcome unexpected obstacles.

Previous Article Going All-In: Investment Strategies from the Poker Table Next Article What is the JOBS Act: Primer for Private Company C-Suite Executives