U.S. farm real estate retained its value over the decade 2000 to 2010, despite the housing market’s tumble [see charts below]. In fact, the average value of land and buildings on farms has steadily increased since the late 1980s, with the sole exception of 2009. See the USDA’s National Agricultural Statistics Service publication, “Land Values,” 2013 edition, here. 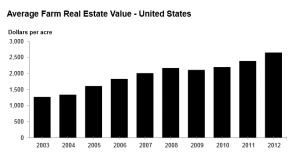 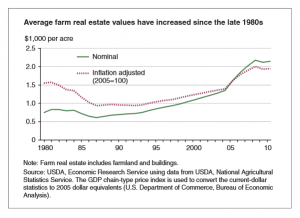 “Farmland is going to be one of the most exciting sectors of the world for the next 10 or 20 years. Finance is going to be a backwater. Go learn how to drive a tractor.” — Jim Rogers, legendary investor, in interview with Smart Money, June 2012

In “Why Jim Rogers is Investing in Farmland” (published July 12, 2012, at Money Morning), he says food prices will “go through the roof,” and farmers and producers will “be in the captain’s seat.” Rogers is best known as a co-founder of Quantum Fund in the 1970s, which posted returns of 4,200 percent over 10 years.

Don Miller, the author of this article, writes, “As the middle class in…emerging markets expand[s],…demand for meat will explode. But to increase meat production, farms will need a lot more grain to feed the livestock.”

Many institutional investors fear that developed-world governments will relieve their enormous debt burdens by allowing inflation to erode the real value of money. Inflation hedges, though, are not found easily. Agricultural property has attractions. But ownership brings responsibilities, costs and risks that need close management. “It is probably wise to assume that the minimum investment period for farmland is 10 years.”

“Farmland: The Next Boom?” by Bret Arends, Wall Street Journal, Sept. 24, 2010. This article is two years old, but it’s still a valuable source of facts to support the case for investing in farmland now. Here are a few excerpts:

Demand for food is soaring. The world has consumed more food than it has produced in nine of the past 10 years, [according to] Susan Payne, chief executive of agricultural investment firm Emergent Asset Management….Another billion mouths to feed will probably be added in the next 15 years. “We expect to see a resource war around 2020,” says Ms. Payne.

Shonda Warner, chief executive of Chess Ag Full Harvest Partners, a farmland investment fund with about $60 million in assets, calculates that U.S. farmland has produced an average return of 11.6% a year since 1951. That includes income and capital gains. U.S. stocks — as measured by the S&P 500 index — have produced 11.8%. And land has produced those gains with half the volatility of the stock market.

Institutions and even rich individuals with, say, half a million dollars to invest now have their pick of specialized funds investing in farmland and agricultural projects here and overseas.

“Historically, farmland investment returns are negatively correlated with traditional asset classes such as stocks and bonds,” wrote Perry Vieth, president of Ceres Partners, in 2012. “In addition, most investors have very little investment exposure to commodities generally or farmland specifically. For those reasons farmland offers favorable diversification for most portfolios which can reduce a portfolio’s overall volatility while enhancing its return.”

Previous Article Investing in Farmland Next Article Equity Crowdfunding Performance Review: Billions for Startups, But What about Returns for Investors?