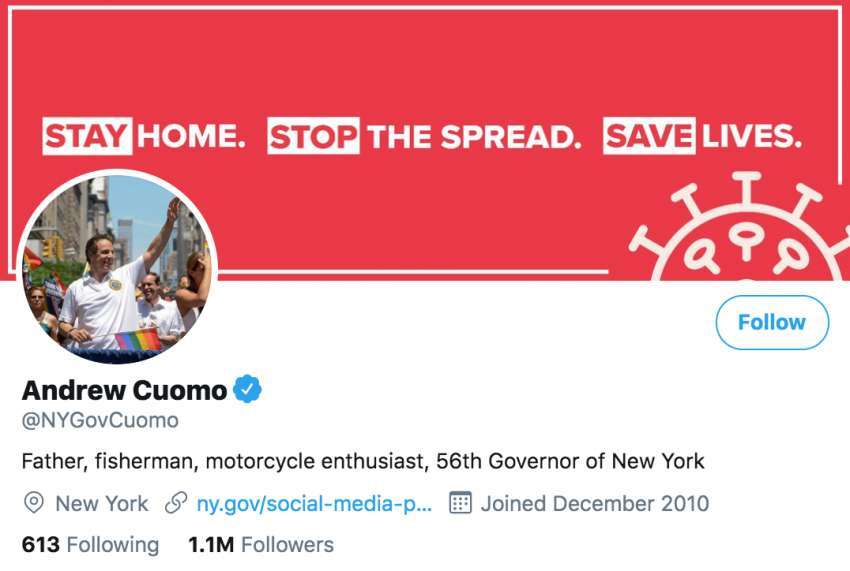 How NY Gov. Andrew Cuomo Combined Behavioral Science and Leadership to Battle COVID-19… Whether He Knew It or Not

Understanding How to Apply Knowledge of Cognitive Biases in Leadership

Behavioral Science has been a popular topic in recent decades. But, while many find it fascinating to learn how people are influenced by cognitive biases, the knowledge isn’t often turned into action. In this unique time of the COVID-19 pandemic, clear opportunities exist for leaders to increase their impact through the science of human behavior. For example, New York Gov. Andrew Cuomo’s briefings reveal several practical techniques for connecting behavioral science and leadership.

Gov. Cuomo has the challenging job of leading one of the most populous states through one of the greatest human crises of its history. This pandemic provides a situation that involves a complex virus, massive resourcing implications, unprecedented personal restrictions, devastating economic implications, divisive politics and an ever-changing understanding of facts. Putting politics aside, Gov. Cuomo has been widely seen as an influential communicator offering empathy, clarity, inspiration and accountability. Most importantly, he has been able to largely get his citizens to buy in and behave in a way that benefits public health for all.

Understanding behavioral science can help a leader prioritize techniques to deliver more effective comprehension and results from stakeholders. Let’s take the COVID-19 briefing on May 13, 2020, to illustrate several techniques that Gov. Cuomo employed, which have a grounding in concepts from behavioral science and tap into an individual’s unconscious biases:

Gov. Cuomo has used the following tag lines since the very beginning of the Pandemic: STAY HOME. STOP THE SPREAD. SAVE LIVES. Why is this effective? It taps into a concept called “cognitive fluency.” The human brain is wired to unconsciously interpret concepts that are easily understood or familiar as also being true, safe and popular. For example, in an academic study, people thought that sayings that rhymed (e.g., “What sobriety conceals, alcohol reveals”) are more truthful than the same saying the same concept without a rhyme (e.g., “What sobriety conceals, alcohol unmasks”). Similarly, in a ZS study, physicians who saw the same data repeated three times were significantly more likely to choose that treatment for a patient versus doctors who saw the data only once.

As he did in other briefings, Gov. Cuomo shared the current statistics on lives lost. His team used a bar chart showing rolling three-day averages, which helped to smooth out the data, showing an easy-to-notice trend of decreasing deaths each day. Beyond providing a transparent look into how the state’s efforts have worked, the graphic below taps into “outcome bias.” 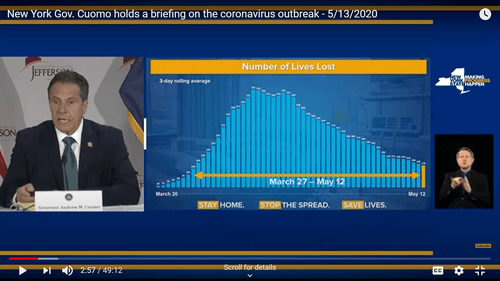 The chart showing a smooth decline in deaths activates the listener’s outcome bias, unconsciously nudging them to think that what the state is doing is a good choice and should continue. This increases confidence in Gov. Cuomo’s leadership and helps ensure his citizens continue to follow direction.

Gov. Cuomo went on to state: “Dr. Fauci warned of unnecessary suffering and death if we open too soon. The key is ‘too soon.’ What does ‘too soon’ mean? You are increasing activity at a rate where the hospital system cannot handle and people are not taking the right precautions. How do we calibrate ‘too soon?’” Rather than playing in a space of ambiguity or qualitative judgment where citizens may fear that decisions to reopen will be arbitrary, Gov. Cuomo explained, “You can measure exactly what you are doing.” To effectively convey how New York will calibrate re-opening, he used the visual metaphor below.

This taps into a concept called “embodied cognition,” which says that our brains use physical experiences to make sense of abstract concepts, which is why metaphors are crucial to deep understanding. This metaphor effect can be significant and largely invisible.

In a 2010 study, people read a paragraph about crime in a fictional town and were asked what the town should do about the crime. For half of the folks, crime was described as a “rampaging beast” while for the others it was described as a “rampaging virus.” People who read the beast metaphor were significantly more likely to recommend more enforcement than people who thought of the crime problem as a virus.

In the above graphic, the use of a valve guided by numerous dials immediately and efficiently sets a variety of expectations in his audience: this will be measured, it will be exact, and we have hands on control and can make opening and closing adjustments to stay in a safe range. He communicates these ideas verbally as well, but the clear visual metaphor allows for deep and immediate understanding that creates true “buy-in,” effectively combining behavioral science and leadership to influence behavior.

Gov. Cuomo explained that the states need to be responsible to combat the virus, but his state, which has experienced the worst illness/death rates in the country, needs help from Washington and the federal government. He put what is needed simply with a number and identified who the financial support would help. 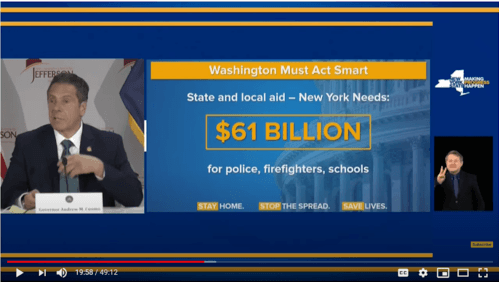 By asking for federal aid specifically “for police, firefighters, schools,” Gov. Cuomo’s team taps into a principle called “moral regulation.” Asking for money may be viewed by some as morally “bad,” or not standing on your own two feet and making it work. Moral regulation says that we unconsciously balance “good” and “bad” decisions. For example, in a series of experiments, people were asked to write about themselves using either “good” or “bad” adjectives. They were then given a chance to donate to charity. People who used the “bad” adjectives were significantly more likely to donate. In other words, thinking about “bad” things made the “good” choice more attractive.

By framing the needed money as specifically for people who do a public good, and whose jobs are thought of in moral terms, Gov. Cuomo creates support for the need. Sure, the state may need the federal government to step in with a large sum, but it is for people who do an unambiguously good thing for others, which balances the scales and creates unconscious comfort.

How Will You Put Behavioral Science into Action?

Gov. Cuomo ended the May 13 briefing as he typically does, reminding New Yorkers that they are “Tough, Smart, United, Disciplined, Loving.” This taps into the unconscious bias of “self-reference,” where people tend to process information better when they associate the information with themselves.

Michael currently delivers management consulting in the areas of organizational transformation, behavioral science, and compliance. He has over 25 years as a compliance and legal professional holding senior roles at GSK, Novartis, PwC, and the Office of Inspector General at the U.S. Department of Health & Human Services.

Jacob is a communications strategy expert with nearly two decades of experience. He leads the Applied Behavioral Insights practice at ZS and is one of the leading practitioners of using behavioral and cognitive science to drive behavior change within customers and organizations. His writing on commercialized behavioral science has appeared in Fast Company, Ad Age,…

Previous Article An Intermediary to Lead the Process: Investment Banker or Business Broker? Next Article Building the Best Strategy to Drive Cash Allocation