September Inflation Ticks Higher Than Expected, but Are Interest Rate Hikes the Answer?

On the tails of a higher-than-expected Producer Price Index, the September inflation figure came in at 8.2%, over the 8.1% expected and just short of last month’s 8.3%.

The markets have responded as they often do when expectations miss, and not just because higher inflation comes with associated pain. It’s also because this reading makes it more likely that the Fed will continue aggressive interest rate hikes as they try to cool an economy where the job market is still too hot and CPI readings look like this. This is especially true given the chaos unfolding in Europe.

Market conditions "may trigger a break in the global hiking cycle. Ever thinner liquidity in the Treasury market, & contagion from a rattled Gilt market, means financial stability is now also a risk for policy makers..We think an early phase out of QT is likely:" @OxfordEconomics

But if hiking interest rates is supposed to put the breaks on inflation, why, exactly, has inflation stayed stubbornly high since hikes began earlier this year?

The argument behind interest rate hikes in an inflationary time period is pretty basic. If we make accessing credit more expensive by raising rates, fewer dollars get pumped into the economy as consumer spending wanes. This improves the purchasing power of the dollar as consumer costs calm down.

You might assume that would indicate a strong negative or inverse correlation between rising interest rates and inflation overall, meaning that as interest rates go up, inflation will go down. But you would be wrong.

If you look at data going back to 1985 on a 1:1 basis, the correlation is actually relatively positive, coming in at 0.48. This would, in theory, indicate that every time inflation goes up, interest rates are likely to go up as well.

One could make the argument that interest rate hikes are intended to impact future economic performance. To this end, the premise of hawkish monetary policy is that interests rate are a leading indicator for the economy. When that indicator goes up, inflation will decrease later down the road. Once more, we were looking for a negative correlation.

When we broke down the information over different time periods, the results were not what we expected. 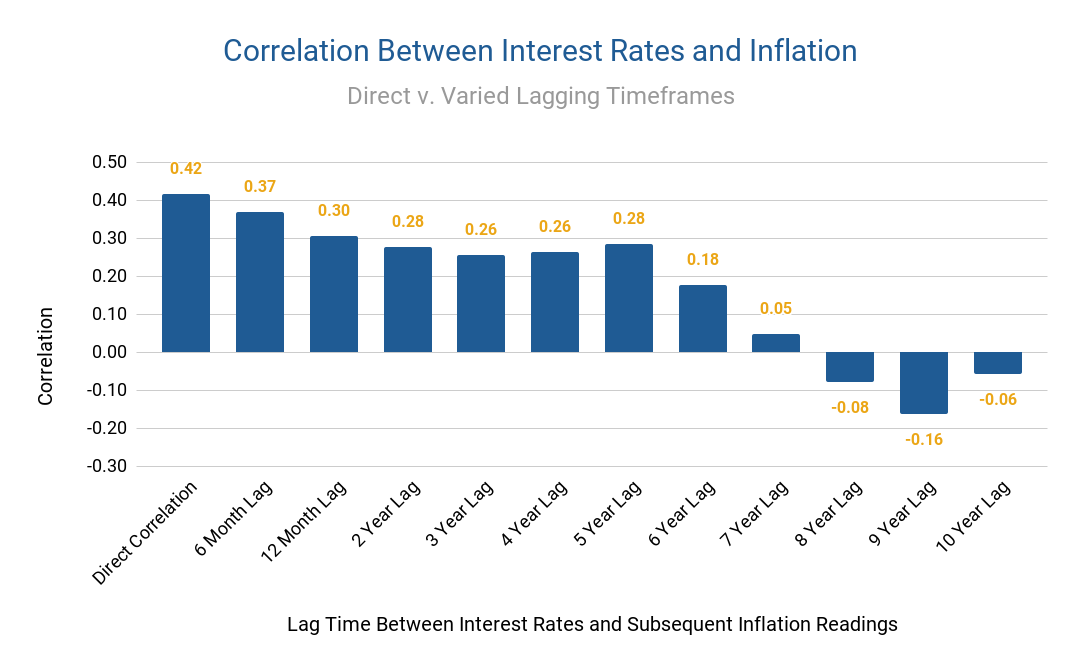 Correlation levels don’t invert until after you get to the 7-year mark, and the inversion is never substantial. That seems to fly in the face of the idea that rate hikes can blaze a better trail forward for the economy.

But as the saying goes, a funny thing happened on the way to the forum…

We decided to flip the data on its head. What happens, we wondered, if we ignored the monetary policy hawks and assumed that inflation is the leading indicator, meaning inflation tells us where interest rates will go? 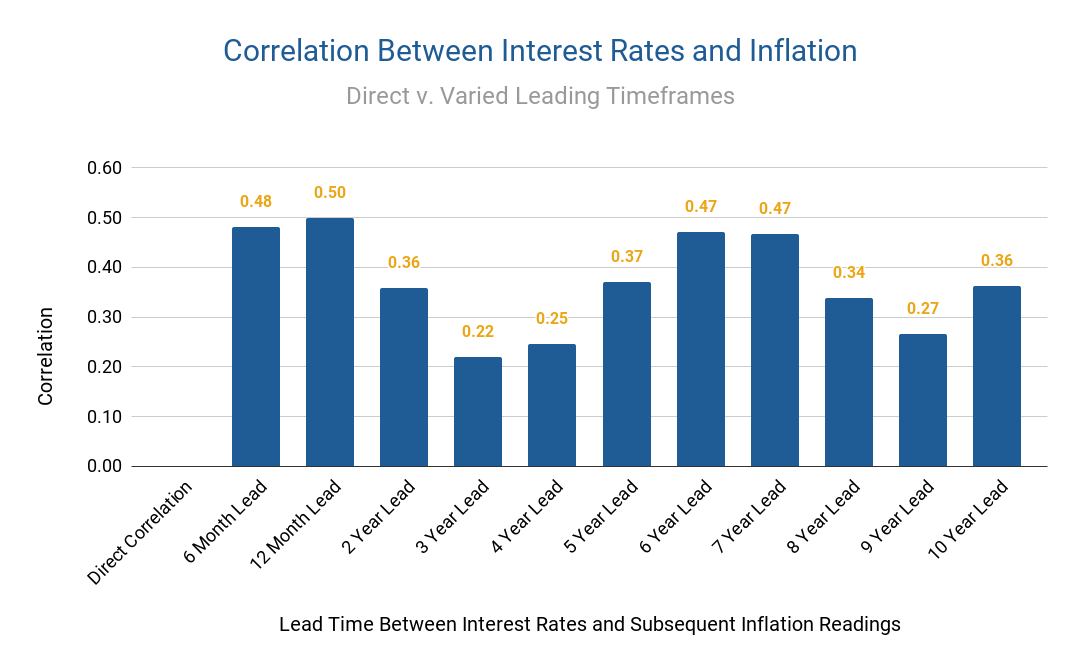 That’s certainly not what proponents of hawkish monetary policy want to believe. That tells us that whatever policy the Federal Reserve Adopts, they’re playing catch-up.

The idea that increasing interest rates is the cure to all that ails an inflationary economic environment is far from new. That concept is so frequently repeated that even those with no understanding of the terminology can grasp that it’s a common belief.

If you look at the data, the knee-jerk reaction might be to assume the argument is a faulty one. The truth is more complicated than that. Interest rates and inflation are two pieces of a very complex puzzle.

Interest rates can work as a means of curbing inflation if they happen in conjunction with either significant cuts to government spending or an increase in taxes. Despite optimism regarding their power, even the Federal Reserve knows this.

Federal Reserve Chair Jerome Powell proclaimed Friday that the central bank has an “unconditional” responsibility to ease inflation and expressed confidence that it will “get the job done.”

But a paper released at the same Jackson Hole, Wyoming summit where Powell spoke suggests policymakers can’t do the job by themselves and actually could make matters worse with aggressive interest rate increases. In the current case, inflation is being driven largely by fiscal spending in response to the Covid crisis. Simply raising interest rates won’t be enough to bring it back down, researchers Francesco Bianchi of Johns Hopkins University and Leonardo Melosi of the Chicago Fed wrote in a white paper released Saturday morning.

“The recent fiscal interventions in response to the Covid pandemic have altered the private sector’s beliefs about the fiscal framework, accelerating the recovery but also determining an increase in fiscal inflation,” the authors said. “This increase in inflation could not have been averted by simply tightening monetary policy.”

The Fed, then, can bring down inflation “only when public debt can be successfully stabilized by credible future fiscal plans,” they added. The paper suggests that without constraints in fiscal spending, rate hikes will make the cost of debt more expensive and drive inflation expectations higher.

If it sounds technical, it is. But understanding the specific data beneath these calculations is not as relevant to interpreting today’s market as is the historical application of these principles. Hawkish monetary policy was adopted during the 1980’s. Even after two periods of significant economic pain, higher interest rates ultimately delivered dividends.

[T]he US undertook a series of important tax- and microeconomic-policy changes, most notably the 1982 and 1986 tax reforms, which sharply lowered marginal rates, as well as market-oriented regulatory reforms starting with the Carter-era deregulation of trucking, air transport, and finance.

The US experienced a two-decade economic boom. A larger GDP boosted tax revenues, enabling debt repayment despite high real-interest rates. By the late 1990s, strange as it sounds now, economists were actually worrying about how financial markets would work once all US Treasury debt had been paid off.

In other words, the wisdom of applying hawkish monetary policy to combat inflation depends on the situation. So what does that mean now?

Is Hawkish Monetary Policy the Answer to Today’s Inflation?

If circumstances matter, ours aren’t great.

Those supply chains are still, in some ways, trying to recover. Supply and demand balance may be a way off, particularly if hawkish monetary policy means consumers start spending less and less in rapid fashion.

Make no mistake —- the global stage is primed for disaster.

A UK proposal to cut taxes for their top earners caused their bond market to collapse, prompting the Bank of England to take extreme measures to keep things afloat. They then warned the support would end as of Friday and that there was likely significant economic pain ahead, prompting even more chaos in the market.

European Central Bank President Christine Lagarde doubled-down on significant rate hikes in the near future. Germany just dramatically slashed its growth projections substantially. The International Money Fund is quite certain Italy is headed for a recession.

The conflict in Ukraine rages on with no end in sight, offering no reprieve from high energy prices. OPEC has announced serious production cuts, which certainly doesn’t help matters.

Pain, at this point, seems inevitable. In the U.S., even the Fed, after indicating a commitment to their aggressive rate hike strategy, conceded that the only way inflation and interest rates go down is if unemployment goes up. That means fewer people working while the economy is in crisis mode. And that’s just here.

No one denies this inflationary environment is dangerous. There are many, many reasons why expert after expert says a global recession is inevitable. There is, however, no consensus among governments, central banks, or economists on the best way to handle it.

It’s not really a question of whether hawkish monetary policy will work right now. It’s a question we’ve been asking since this summer: could this be a different kind of recession than we’ve experienced before? If so, exactly how bad will this get?