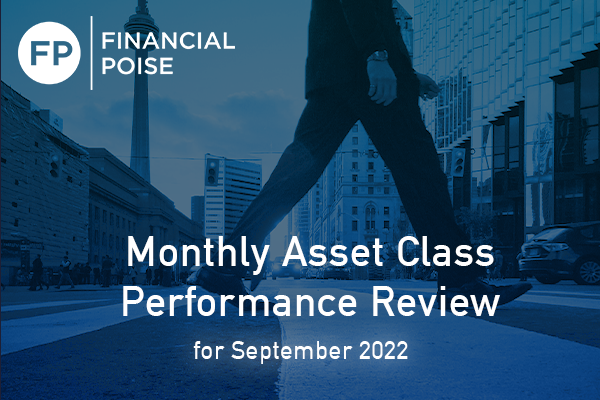 It’s the beginning of October and the start of spooky season. So maybe it’s fitting that reviewing September’s asset class performance paints a chilling picture.

To be very clear: there is often a lot of disagreement over what constitutes an asset class. There is also frequent disagreement over the best ways to measure the performance of an asset class during any given period. This is intended to be a snapshot of some of the most common asset classes in American portfolios today (which, yes, includes crypto now) by using reputable indices, funds, and ETFs to help us look at the big picture (see below for sources).

Your exposure to said asset classes may be the same or different. And it should be noted that this data is not intended to be any kind of financial advice and that different kinds of investments carry different risks which may not be appropriate for every investor.

This is just information. What you choose to do with it is ultimately your choice.

So whether you’re investing on your own, looking for insights that can help facilitate conversations with your financial planner, or are just plain interested in the numbers, this is where we stand as we kick off October. 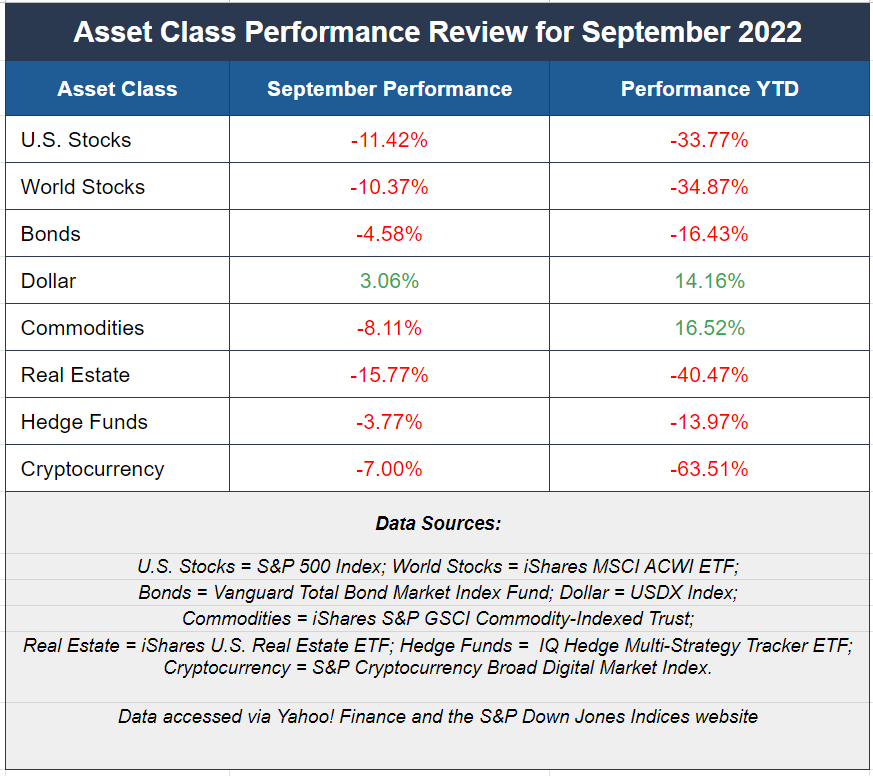 The bad news is that most asset classes took a shellacking last month. In fact, as CNBC reported, Americans had $9 trillion in wealth erased last month by the stock market losses alone.

For context, by the time the 2008 recession was over, stockholders had lost an estimated $6.9 trillion.

The dollar rebounded quite a bit, which makes sense, given the current climate. After all, the Federal Reserve has continued its aggressive rate hike policy in an effort to combat inflation and protect the dollar’s value.

In the meantime, the delayed action of central banks in Europe has caused significant turbulence. Amidst a scramble by the Bank of England, for instance, the British pound is now down 16.77 percent year to date as of this writing.

And it only gets more complicated from there. The crumbling value of the pound has put major banking institutions in Europe in pronounced peril. Though the mechanics behind their vulnerability are complicated and warrant a longer discussion at a later time, this should tell you how big the risk is:

$600 Billion: What Lehman Brothers held in assets when they crashed and took the economy with them.

Credit Suisse is at a 'Critical Moment' now, says the CEO.

What lies in store for the world?? pic.twitter.com/VIaMU7dSLX

Though it might be tempting to view that as a Europe problem, the global economy is inextricably intertwined. Europe’s problem will quickly hit U.S. investors, many of whom have exposure to global stocks in their portfolio.

None of this is simple, and it’s certainly not heartening. Snapshots like these, however, warrant taking a moment to breathe before talking to your financial planner about your best strategies in this storm.

Previous Article Labor Union Momentum and Economic Trajectories Next Article Financial Planning for Retirement — Should I Stay or Should I Go?