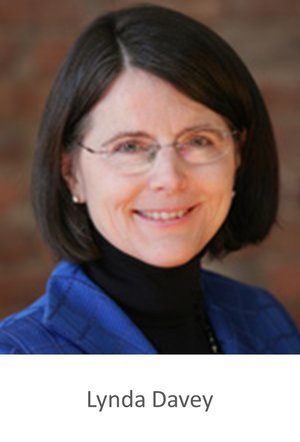 Lynda Davey’s finance career spans 30 years of advising, financing and investing in public and private companies. She serves as Co-Chief Executive Officer of Avalon Net Worth. Ms. Davey brings broad expertise to her clients, having assisted them strategically position their companies for success by focusing on balanced capitalization, developing and implementing strategic growth plans and optimally structuring transactions.

Ms. Davey is the Chairman and Founder of Avalon Securities Ltd, one of the few woman-owned FINRA and SEC registered broker dealers. Since 1992, Avalon has provided bulge bracket investment banking assistance to mid-market clients. The firm cultivates long term relationships with high caliber business owners and senior executives by assisting them with both short-term and long-term needs including financing for business expansions, balance sheet recapitalizations, acquisitions and liquidity events.

Prior to founding Avalon, Ms. Davey worked at Salomon Brothers on public offerings, divestitures, acquisitions and private placements for clients in a variety of industries. She was also President of Tribeca Corp, a merchant bank with large equity investments in public consumer companies and private buyouts. Before commencing her finance career Ms. Davey practiced as a registered architect.

Ms. Davey serves on the Board and the Finance Committee and previously chaired the Audit Committee of the Girl Scouts of Greater New York and is a Manager of Verite Capital Partners, LLC, a private investment and consulting firm. From October 2012 to September 2014, Ms. Davey served as Chairman of the Board of Wet Seal, Inc. (Nasdaq: WTSLA) a 554 unit specialty retailer of fashionable and contemporary apparel and accessory items. She served for ten years on the Advisory Council of Wells Fargo’s Capital Finance Group and its predecessor entity, the Paragon Capital Retail Group. She was previously a Board member and head of the Audit Committee for ICTS International NV (OTC BB:ICTSF) a pioneering aviation security company headquartered in Amsterdam, Tuffy Associates Corp., a private auto service franchiser, Jane Cosmetics, and Textus, a private textile company. In addition, Ms. Davey was a founding member of the Advisory Board of the Fashion Institute of Technology’s Center for Design Innovation.

Ms. Davey has been a featured speaker at finance conferences including the 2nd Annual International Textile and Apparel Conference held in Beijing, the New York Entrepreneurship Summit on The Changing Landscape of Finance in New York, and Touched by An Angel. She is recognized as a valuation expert before the New York State and various bankruptcy courts. She was a finalist for the New York City Ernst & Young 1998 Entrepreneur of the Year Award. Her television appearances include The Woman’s Connection and Fox News Channel with Neil Cavuto.