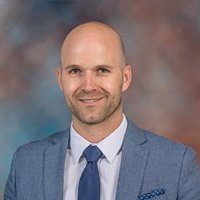 Jeff Bryson is the executive director of the Stollery Charitable Foundation (SCF), a private family foundation that provides  grants to charities, strengthens the charitable sector, and fosters  partnerships to improve communities.
Jeff was born and raised in Kamloops, B.C., where he attended his first year of university before transferring to the University of Alberta.  He  completed two degrees at the U. of A. and made Edmonton his home.

Following a career in the insurance industry, where he led initiatives in  professional development and team training, Jeff became the granting  director at SCF, overseeing disbursements of more than $2 million per  year.  He was promoted to the position of executive director of SCF in  2013.  He is responsible for all operations and administration of this  endowed foundation, working with a board of six directors.  As grandson  of SCF’s founders, Jeff (like the founders’ other three grandchildren)  has been an advisor to the board of directors for more than a decade.   Through this involvement he has participated in several rounds of  strategic planning and witnessed the transition of the board from its  founders to their children and children’s spouses – while maintaining  the vision and values of the foundation’s founders.

Liaison with charities – and with the community at large in both Edmonton and  Kamloops – is key to Jeff’s role.  He works in close collaboration with  Edmonton Community Foundation and other funders, and he contributes his  expertise to a wide spectrum of committees, workshops, and panels.

Jeff lives in Edmonton with his wife and two children.  He lives an active  life, participating in many sports, volunteering, and travelling with  his family.  He continues to learn about the legal and financial /  investment aspects of SCF as the Foundation grows in its role as a  convenor of community connections.  Jeff enjoys his involvement in the  charitable sector and is impressed with the capacity of local agencies  to effect real social change.