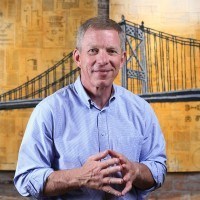 Chris Anderson is an accomplished senior executive with both public and private board experience. As a senior executive, he has been accountable for leading a highly diversified $1.2 billion company. Chris has a passion for bringing out the best in executives and coaching them to excel beyond their perceived capabilities. He has taken his proven executive expertise and coupled it with this coaching passion to form The CJ Anderson Company, an executive coaching firm that provides a real-world training ground for high-functioning leaders seeking to tap latent potential, improve decision making, and achieve breakthrough performance.

Anderson began his career with The Andersons, Inc., a Family Limited Partnership, with 60+ family partners; that went public (NASDAQ:ANDE) midway through his tenure. There, he literally began as ‘low man on the totem pole’ as a foreman in a fertilizer operating division, and began accumulating his general management skill-set with roles in diverse units such as Automotive Service, and Market Research.

He later progressed through positions of increasing responsibility to serve as one of three Group Presidents, followed by Executive Vice President in the billion+ revenues family-controlled business, with accomplishments including a breakout diversification strategy. One specific outcome of his effort is his former railcar leasing/rebuilding group’s growth from zero railcars in 1995, to 23,500 today. It’s been said by John Barrett, Chairman and CEO of Western & Southern Financial Group that “Chris installed the platform, discipline, and team that transformed The Andersons railcar start-up into its most profitable business.” He is acknowledged for mentoring and developing many emerging leaders who now hold senior management posts.

Anderson is an active member of The National Association of Corporate Directors (NACD) and The Private Directors Association (PDA). He is qualified for Audit and Nominating and Governance Committee work, and is well qualified for Board engagements at public and private companies, with particular expertise in family-controlled businesses. In his present role as Founder & President of The CJ Anderson Company, Chris created the proprietary BoardLite™ product, a surrogate board for leaders without boards, or as a skill-building platform for leaders with boards seeking to improve board effectiveness.

He resides near Toledo, Ohio with his wife and is the proud father of three grown daughters and three grandchildren. In his downtime, he enjoys skiing, private aviation, and lacrosse (as observer and participant).