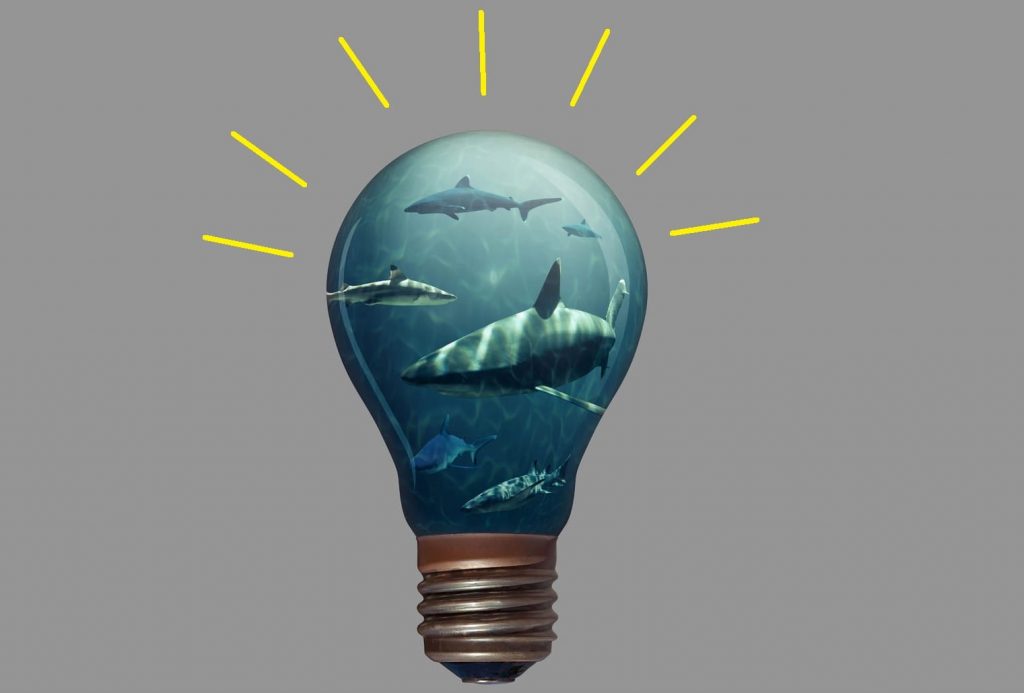 Swimming in the “Shark Tank”: Is Reality TV Investing the Real Deal?

If you’re an entrepreneur looking for outside capital, chances are you’ve already shed a little bit of metaphorical blood to get what you want during a capital raise. The hope of every burgeoning business builder is that the financial gains received from investors will be enough to stem the hemorrhage of expenses needed to get a business off the ground and keep it afloat. Is reality TV investing a viable option to explore?

While counter-intuitive in the animal kingdom, in the business world, what a bleeding company needs to stay alive is a shark. Enter the frenzy of reality TV investing. ABC’s ‘Shark Tank’ became a quick hit on TV featuring entrepreneurs various ideas, products and innovations seeking to win the financial backing of venture capitalists. These entrepreneurs negotiate on-air with investors to make a deal. Afterward, the “Sharks,” as the venture capitalists are called, will conduct further due diligence and negotiate final legal details outside of the show. The 4-time Emmy-winning show is innovative within the reality TV market and certainly has no shortage of drama.

In the business world, what a bleeding company needs to stay alive is a shark

It’s not always easy to spot the winners and losers, however, because the high stakes world of venture investing is fraught with complexities. Is the entrepreneur who scores an investment but then loses a portion of their equity and a level of control really a winner? Is someone really a loser if they don’t score a deal, but receive enough attention from the show that they land other investors? The entertainment value is indisputable, but is reality TV investing realistic? Is what we see on “Shark Tank” how VC investors and entrepreneurs actually negotiate?

Each episode of “Shark Tank” introduces 3 to 4 business owners who make a pitch before a panel of 5 potential investors, which include the likes of Dallas Mavericks owner Mark Cuban, real estate mogul Barbara Corcoran and, at times, celebrities like Richard Branson and Alex Rodriguez. Contestants pitch their business, state how much equity they are willing to give up in exchange for an investment, and take questions from the panel. If any of the investors are interested, they’ll make an offer. The entrepreneur must decide on the spot to accept the offer, decline or negotiate for a better deal.

However, the high-pressure deal making is somewhat exaggerated for TV. In reality, ‘Shark Tank’ captures the essence of deal-making, but the overall format is fudged for entertainment, say some. “It’s a very shortened, sound-bite-filled version of what we do,” John Backus, co-founder and managing director of New Atlantic Ventures, told Forbes. “On TV, they’re making a decision in minutes. In real life, we make decisions in months.”

On TV, they’re making a decision in minutes. In real life, investors make decisions in months.

Each week, the Sharks ask questions that capital-seeking entrepreneurs would face in reality. Sharks inquire about valuations, margins, sales, revenues, the business model and the owner’s experience. In short, the Sharks evaluate each business pitch the same way a venture capitalist or angel investor would even if she or he weren’t holding court for an audience of millions.

And therein lies the rub. Because it does hold high entertainment value, it’s easy to dismiss ‘Shark Tank’ as schlock TV. Further, it’s been noted that some entrepreneurs choose to appear on the show just for the publicity, with no interest in financial backing. Even so, reality TV investing does involve a component of real investments and real money.

One of the ways ‘Shark Tank’ digresses from real-world pitching is how the Sharks negotiate. Investors typically make offers in private, and it’s not as cutthroat or competitive among investors as entrepreneurs might hope. Eric Quanstrom from Pipeliner CRM said, “No VC I’ve ever met wants to conduct a pitch meeting in conjunction with another VC.”

Whereas reality TV investment Sharks do not conduct much, if any, prior due diligence, real-world investors do their homework on a company before the pitch. Because of the think-quick approach on TV, some ‘Shark Tank’ panel members have been known to withdraw offers or restructure deals after making their on-screen offer based on later findings, when the adrenaline rush has died.

You may also like, “How to get Venture Capital Funding“

Eric Durtschi, CEO of Crio Brü, appeared on the show in Season 5 and observed, “The Sharks make it look like they know about your business because they have the file, but they have spent very little time looking at it.” Then there’s the fact that the show needs to balance a variety of businesses for entertainment’s sake.

“Negotiations do not happen during the pitch in my experience as an angel,” said Kelly Keenan Trumpbour, founder of See Jane Invest and a director with Baltimore Angels. “The show needs to entertain audiences and they often include entrepreneurs who would never make it through pre-screen. The show includes them for the same reason ‘American Idol’ auditions people who are tone-deaf. Without that contrast, the content all looks the same and risks boring viewers.”

“Shark Tank” has Surprising Value as a Teaching Tool

For all its white-knuckled dramatics, “Shark Tank” can give novice investors an idea about the value of due diligence. Each celebrity investor has his or her own style and investment criteria.

For instance, for Kevin O’Leary, aka “Mr. Wonderful,” a solid investment is all about the numbers. In contrast, the “Queen of QVC,” Lori Greiner, will not invest in any product that she isn’t personally passionate about, regardless of how good the investment looks.

At least 50 percent of the people that show up on 'Shark Tank’ don’t get deals, and some of them, frankly, get shredded

An aspect of “Shark Tank” that reels in viewers week after week are the bidding wars. Sharks take playful potshots at each other while trying to convince an entrepreneur that they offer the best deal. Entrepreneurs make counteroffers, after which the Sharks reconsider whether or not they want to stick to their guns. Sometimes it works, sometimes Sharks won’t bite.

“At least 50 percent of the people that show up on [‘Shark Tank’] don’t get deals, and some of them, frankly, get shredded,” said Clay Newbill, the show’s executive producer told Forbes. “There are times when the sharks don’t like their ideas and it doesn’t go well. It’s one of the things we do try to represent. We like to be honest about what’s happening.”

Getting No Bites May Still Yield a Taste of Success

In spite of the theatrics, some ‘Shark Tank’ investors do agree to real deals. A few of those deals go on to make high yields for both parties. Alternately, others flop around on the deck. But just because business owners don’t get a deal on the show doesn’t mean their companies ultimately flounder or die.

You may also like the Financial Poise webinar, “Raising Capital: Negotiating with Potential Investors“

Kelly Costello, founder of Puppy Cake, a novelty dog treats company, appeared on Shark Tank in Season 3. While Costello didn’t land a deal, her business did expand tremendously after her appearance, a phenomenon known as “The Shark Tank Effect.” Puppy Cake products are now available in thousands of retail stores.

At the end of the broadcast day, reality TV investing may not be an accurate reflection of how it all goes down, but when it does work, the money is real and that keeps investors, audiences and entrepreneurs lining up for their bite.

follow me on:
Previous Article Real Estate Investment Portfolio Diversity is Sound Strategy Next Article 7 Must-Haves for your Company Employee Handbook- for their Benefit and Yours