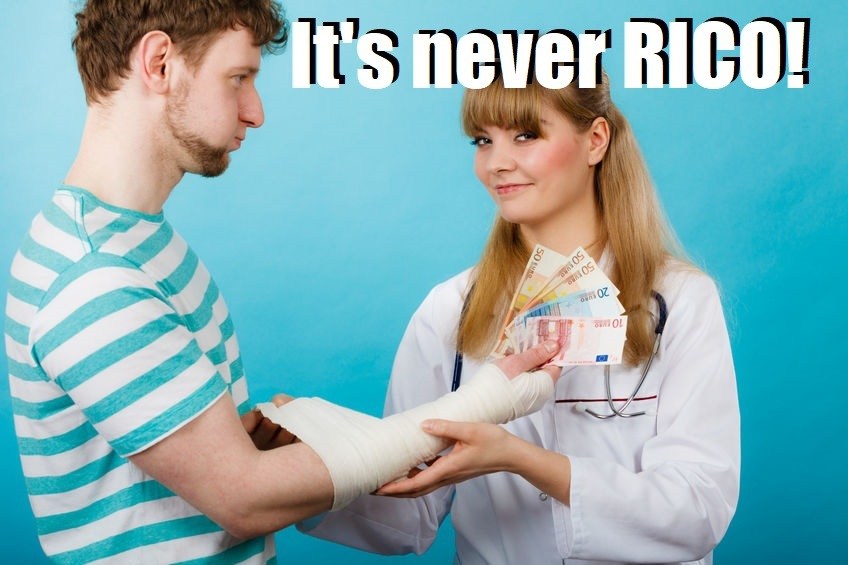 It’s Never RICO! What this Column Presupposes is, Maybe Sometimes it is

If you type the phrase “It’s never RICO” into Google, you’ll get a bunch of hits, including this clever and interesting discussion. The Google image search returns “House, M.D.” memes. I would beg you, dear reader, not to Google “RICO Trump”. It’s a rabbit hole where you will see all sorts of nonsense about alleged forthcoming sealed indictments (and the like). If you operate outside the legal world, you might be asking, why does it matter at all?

The RICO Act, in short, has taken a place in the public imagination far beyond its utility, but it is, in reality, a complex and difficult statute that is designed to prevent fraudulent acts through the penalty of steep financial damages. Misused and misunderstood, yes, frequently. This is why most people, when deciding if a case meets the legal criteria for RICO lawsuit simply throw up their hands and say “It’s never RICO!” But it might be —and it does matter.

Let’s back up a bit. “RICO” stands for “Racketeering and Corrupt Organizations,” a federal statute that has both criminal and civil components, and there are some subtle, but real differences between the two.

My references in this column are to civil RICO (18 U.S.C. § 1964(c)): awarded to “any person injured in his business or property” by reason of a RICO violation; i.e. when private plaintiff sues another for money damages or, in even rarer instances, injunctive relief.

RICO allows plaintiffs to bring a federal claim that, if successful, entitles them to triple the amount of damages, as well as attorneys’ fees. Triple damages is a pretty powerful incentive. All sorts of plaintiffs in all sorts of contexts have asserted RICO claims, which has contributed to RICO’s pop-culture popularity. If you can win, you win big.

A RICO claim is not simply a dressed-up fraud claim, nor it is a statute that expressly applies only in situations when the defendants are really, really bad. RICO was drafted to be used against organized crime, and the elements required to state a RICO claim reflect that intent.

RICO…entitles plaintiffs to triple the amount of damages [which is] a pretty powerful incentive…If you can win, you win big.

In order to state a claim for RICO, a plaintiff must allege that the defendants “conducted” an “enterprise” through a “pattern” of “racketeering activity” and that the plaintiff was harmed in that process.

The terms “conducted”, “enterprise”, “pattern” and “racketeering activity” are all legal terms of art whose definitions are hotly debated and over which much ink is spilled onto paperwork flying back and forth in courts. (By the way, if an anonymous, internet armchair critic tells you that he’s about to bring a lawsuit against another person or entity for being a RICO enterprise, that would be good time to log off.)

Despite the pop-culture baggage, RICO is far from a dead letter. In fact it can be relevant to something as mundane as an insurance company growing weary of excessive payments on auto accident claims. Their response? File a racketeering lawsuit. Let’s look at one recent RICO case and see what it can tell us about the current state of civil RICO:

In 2014, State Farm Insurance Co. filed a RICO complaint in Michigan against a chiropractic clinic and others, alleging, in the court’s words, that there had been “a concerted scheme to defraud [State Farm] through the submission of claims for medically unnecessary, and in some cases entirely unperformed, services.” Per State Farm’s complaint, this allegedly included anything from sham treatments to improperly soliciting accident-victim clients, to excessive billing to running up false charges through unnecessary testing, to receiving payments under the table for services — and more.

The chiropractic clinic, of course, moved to dismiss, but lost. Why? Because the court ruled State Farm had stated a viable RICO claim.

What did State Farm allege?

First, it alleged that the chiropractic clinic and its associates were working in collusion to run a complex scam that, in the Supreme Court’s words, was “a continuing unit that functions with a common purpose” — known in the legal world as an “association-in-fact”. It is not difficult to picture, say, an organized crime family or a street gang meeting this same definition. State Farm alleged the defendant chiropractic clinic, its owners and staff constituted an association-in-fact. The Court found this allegation plausible.

State Farm next alleged that each of the defendants “made or carried out decisions on behalf of the enterprise,” an allegation required by the Supreme Court’s Reves v. Ernst & Young decision. This means that each person named in the lawsuit was included because they were high enough on the food chain to have participated in the “operation or management” of the enterprise.

RICO should not be used to sweep up lower-level people as defendants if they’re not the decision makers.

This inclusion of each person directly involved is important because, according to the Supreme Court, RICO should not be used to sweep up lower-level people as defendants if they’re not the decision makers. Only those who satisfy the Reves test should be sued. The chiropractic defendants countered that State Farm allegations on this point did not satisfy the legal definition for each to be included in the suit, but the Court found that they did.

The defendants’ other arguments did not fare any better. The Court found that State Farm satisfied all of the remaining elements of RICO and therefore stated a RICO claim. This case was settled about a year later.

Was State Farm — one of the largest insurance companies in the country — what RICO’s drafters had in mind as a civil RICO plaintiff? Probably not. In fact, they probably were thinking more of snaring an Al Capone.

However, the scheme alleged by State Farm is the type of scheme that RICO was designed to stop. RICO was aimed at punishing people who use otherwise legitimate businesses for nefarious ends, which is exactly what State Farm alleged.

Can you Agree to be Defrauded?

The settlement in this case was confidential, meaning we don’t know what a jury would have made of these allegations. We do know that a federal judge found that State Farm’s claim was plausible and specific enough to survive a motion to dismiss. Racketeering is alive and well, if you can prove it, and individuals aren’t always the only victims of these bad acts.

While “it’s never RICO” may be the appropriate response to a Twitter “lawyer” braying about sealed Presidential indictments, in business litigation civil RICO will — every now and again — bare its very real teeth.

Previous Article What are GMOs? Let’s Explore the History, Myths and Issues Next Article What a Racket: Tales of Equifax, Experian and TransUnion