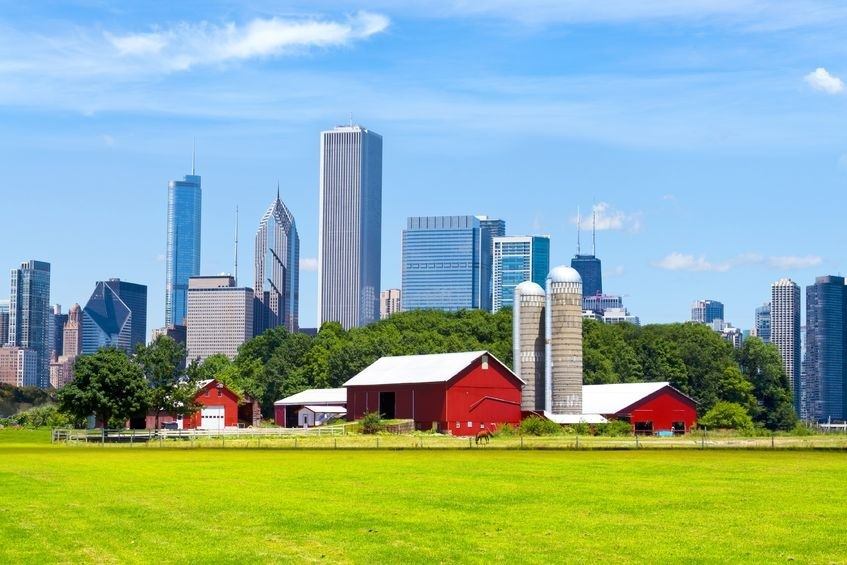 Can You Get Wealthy Buying Farmland as an Investment?

Between 2009-2014 America’s farmland values grew rapidly, according to the USDA. In 2009, the value of an acre of farmland was $2000, and by 2014, the value of increased upward of $3000 per acre. Although growth in farmland prices tapered off and then decreased in value by 2016, the downward trend didn’t last long.

By 2017, farmland values rebounded back upward, according to the USDA. In the end, buying farmland as an investment may be a potentially lucrative move for those looking to hold an overall stable, tangible asset.

You may also like, “How the U.S. Destroyed Its Food System (and How Regenerative Agriculture Can Fix it)”

However, according to OECD Data, “as compared to other commodities, meat is characterized by high production costs and high output prices.” In fact, Rachel Premack of the Washington Post notes that it takes 48 times the amount of water to produce meat than it does to produce vegetables. The meat and dairy industries require endless resources to raise, kill, prepare and sell animals. Not only is this costly to our environment, it is extremely unproductive.

But why is the meat industry in such high demand? According to the OECD, “meat consumption is related to living standards, diet, livestock production and consumer prices, as well as macroeconomic uncertainty and shocks to GDP.”

Buying farmland as an investment could put you in the middle of a strong consumer trend as more people explore health through food.

Yet, the Academy of Nutrition and Dietetics concluded that, “plant-based diets are more environmentally sustainable than diets rich in animal products because they use fewer natural resources and are associated with much less environmental damage.”

Buying farmland as an investment could put you in the middle of a strong consumer trend as more people explore health through food. As more and more people convert to plant-based diets (because of health or environmental concerns), the demand for crops will continue to increase.

You may also like, “How to Invest and Live with Intent: Plant-Based Diets and a Cleaner Climate”

As more and more people convert to plant-based diets (because of health or environmental concerns), the demand for crops will very likely continue to increase.

The Future is Bright (Green) In Farmland Investing

Veggies aren’t just for dinner anymore. Buying farmland for an investment could extend well beyond just consumable food items. Growing crops that are also used to create biofuels, which remain in high demand, would be a realistic and viable pursuit as well. And don’t forget about the use of farmland for wind farms.

You may also like, “What are GMO’s? Let’s Explore History, Myths and Issues”

Further, one particularly powerful trend which stands to dramatically increase farmland values has yet to be felt: inflation. As defined by the Bureau of Labor Statistics, inflation refers to “the overall general upward price movement of goods and services in the economy.” As the Economist explains, farmland, “has proven relatively resistant to inflation, and is less sensitive to economic shocks (people continue to eat even during downturns) and to interest-rate hikes.”

Both of these factors combined practically ensure a high performing portfolio for those exploring buying farmland as an investment.

Buying Farmland as an Investment Equates to Watching Grass Grow

Alas, the illiquid nature of farmland has prevented the investment community from participating in past and future appreciation of farmland. Traditionally most farmland has been passed down from generation to generation by succession, leaving investors “out of the game.” However, in recent years, there have been increased opportunities attracting investors interested in buying farmland as an investment.

As the Economist explains, farmers often have no successor who wishes to farm the land, and, in order to keep up with new farming trends, continued investment would require funds that most farmers do not have access to.

Investing in farmland combines the allure of a tangible asset  with annual returns of 12%  which translates to: Buying farmland for an investment, along with maintaining a diverse portfolio, may be a smart bet for future financial success.

A passionate environmentalist and animal rights' advocate, Sophie Friedland is dedicated to the idea that furthering these imperatives and being financially successful are not mutually exclusive. A college Freshman at the time of her first submission to Financial Poise, Sophie is Financial Poise's youngest-ever contributor.

View all articles by Sophie »

Previous Article Life is Short: Defining the Risks and Rewards of Chasing Your Dreams Next Article Make Outreach Effective Fast: Learn How to Use Facebook Ads