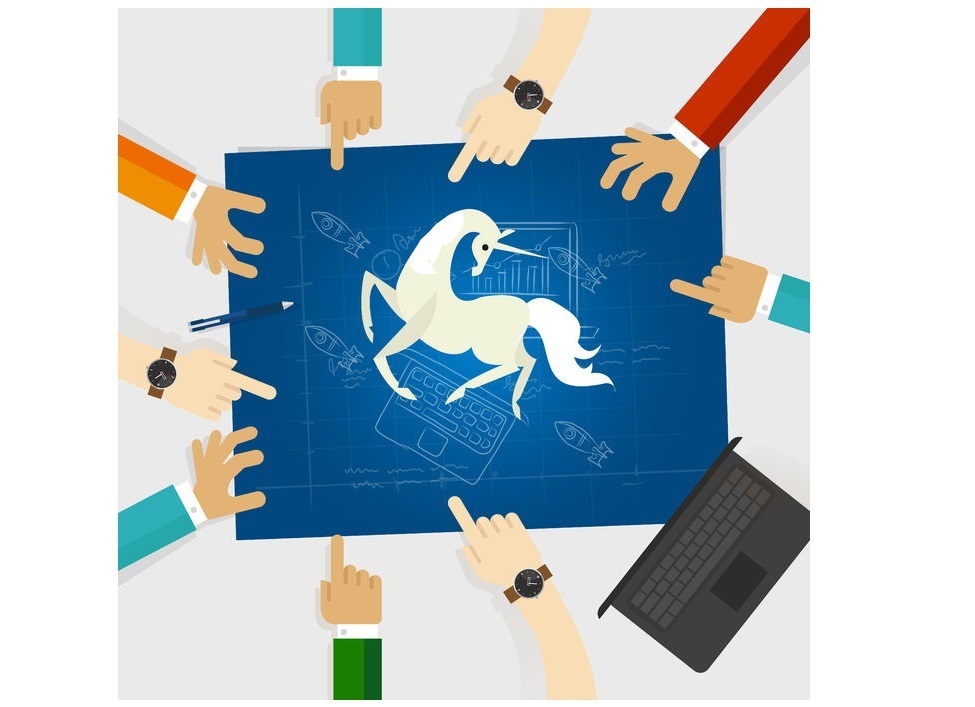 Venture Capital Unicorns are as Rare as Real Unicorns

A unicorn is an imaginary horse-like creature with a large, pointed horn. Venture capital unicorns are companies still privately owned with valuations exceeding $1 billion. Valuation is based on share price during the latest fundraising round.

Industry source CB Insights reports that there are now approximately 220 unicorns globally, and that number continues to fluctuate. The highest valued U.S. unicorns are Uber (valuation $68 billion) and Airbnb ($29 billion).

Unicorns may appear beautiful, but their valuations don’t seem real.

At VCapital, we view investing in venture capital unicorns with concern. We fear they may be like the mythical unicorn: They may appear beautiful, but their valuations don’t seem real.

How to Value a Venture

Consider the traditional company valuation method taught in finance textbooks. Valuation equals the net present value of projected future cash flows discounted to reflect cost of capital and risk. At least in theory, this is what the stock market is about.

You may also like the Financial Poise webinar, “Alternative Investing Part 1: Investing in Venture Capital, Private Equity and Hedge Funds.“

It entails a lot of guessing and judgment. We often hear about mature businesses valued at around 10 times annual cash flow. But venture capital-funded companies are not mature. A company not yet profitable may still be worth hundreds of millions or even billions of dollars, based on tremendous potential. A company with marginal profitability and cash flow may be valued at 50 or even 100 times its current cash flow due to anticipated growth.

venture capital-funded companies are not mature.

A simple, pragmatic approach to valuing a venture is to project future profitability and cash flow when the business will have reached maturity. How big and profitable do you believe it will become? A valuation roughly 10 times projected sustainable annual cash flow could seem reasonable.

Applying that framework, is Uber a venture capital unicorn, or really worth $68 billion? Its $3 billion loss in 2016 and continued losses in first half 2017 have limited relevance. What’s relevant is projected profit and cash flow when the company reaches maturity. Is it likely then to generate annual cash flow of $6 billion to $7 billion?

That will depend on factors such as competition and the regulatory environment. Consider  competition is strengthening. Chinese rideshare company Didi Chuxing has pushed Uber out of China. In the U.S., Uber competitor Lyft is growing. Uber also faces labor and government regulatory challenges in many major cities.

Also, while annual cash flow of $6 billion to $7 billion might justify the current $68 billion valuation, investors want big gains. Can you envision cash flows of $10 billion? Many can’t.

Japanese technology behemoth SoftBank is planning a major investment in Uber. The bad news for existing late-round investors is that most of SoftBank’s investment will reflect a valuation of $50 billion. That’s quite a drop from the recent $68 billion. Time and again its seen that venture capital unicorns are rare and should be approached with caution by potential investors.

Consider Airbnb. It’s already 9 years old and well-established. It reportedly reached modest profitability in 2016. But this company, too, faces significant headwinds. They include major legal restrictions in high-traffic cities, including New York, San Francisco and Paris. Competitors focused in specific niches like vacation lodging are also emerging. Will Airbnb ever generate cash flow of $3 billion yearly to justify its $29 billion valuation? Or $5 billion-plus to enable meaningful gain for latest investors?

Selected venture capital-funded winners like Facebook have achieved results justifying their tremendous pre-IPO valuations. Almost everything seems to have gone according to plan for these companies. But that happens very rarely. Unfortunately, too many of today’s IPO valuations seem to assume such perfection.

Two recent venture capital unicorns, Snap and Blue Apron, show what can happen when pre-IPO valuations are too high. Snap’s pre-IPO valuation was $18 billion. Its current stock price, around $12.57, represents a valuation of $15.1 billion, 16% below pre-IPO level.

Stock prices sometimes do decline following IPO and then rebound to new heights. Facebook’s share price dropped roughly 50% in the months following its $38 IPO. Its stock price today is $179! So Snap’s stock price may snap back.

You may also like, “Can Conservative Value Investors Love Venture Capital too?“

The Problem with Venture Capital Unicorns

Beyond these two, there has been a dearth of unicorn IPOs. Some say that unicorns are staying private to avoid the short-term market pressures of public ownership. Some leading VCs blame the stock market’s obsession with short-term results.

To overcome such short-term focus, some major VCs are seeking regulatory approval to launch a new Long-Term Stock Exchange

The Wall Street Journal reported Oct.17 that, to overcome such short-term focus, some major VCs are seeking regulatory approval to launch a new Long-Term Stock Exchange. The new exchange would encourage long-term thinking by assigning shareholder voting power based on how long the shareholder has owned the shares. They call this “tenure voting.” They would also ban executive compensation tied to short-term results.

There is concern with the stock market’s short-term focus, but at the same time, the Long-Term Stock Exchange has its challenges as well. It is possible that proposed provisions would reduce executive accountability and could hurt individual investors.

The dearth IPOs from venture capital unicorns is the reason for inflated pre-IPO valuations. Venture capital industry publication CB Insights agrees. They feel that many unicorn valuations, and hence, IPO price expectations, are too high.

IPOs are booming in China and throughout the Asia-Pacific region. The Wall Street Journal reported Nov. 14 that there have been over 1,450 IPOs globally year-to-date, raising $170 billion. This compares to 950 IPOs raising $120 billion for the same period in 2016. Today’s capital markets are global. Capital flows to wherever investor opportunities are greatest. There is enthusiasm for the right IPOs.

You may also like the Financial Poise webinar, “Selecting the Right Valuation Expert“

While most fail, success could mean an exit in the tens or even hundreds of millions of dollars

There have also been few unicorns acquired by larger established companies. That’s not because of a lack of potential acquirer appetite. According to CB Insights, as of late 2016, there had been 21 acquisitions of private tech companies during the year for more than $1 billion. Only two had been unicorns based on their last fundraising round. We’re guessing that some unicorns hoped for acquirers, but that their share price expectations were too high.

Get in on Early-stage Investing, Before Valuations Escalate

It’s smart business for VC firms to focus on early fundraising rounds before valuations escalate,  like early-stage investments, where valuations may be $5 million or $10 million, or even $10 million to $20 million. While most fail, success could mean an exit in the tens or even hundreds of millions of dollars. That’s how to make rich returns in venture capital.

View all articles by Kenneth »

follow me on:
Previous Article Learn How to Promote Yourself Without Being Shameless Next Article Retiring Abroad: Does Your Wanderlust Make Financial Sense?