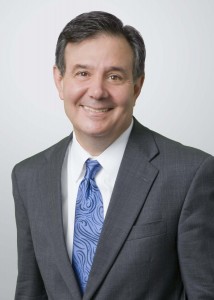 The Financial Poise editors recently caught up with Holland & Knight partner Robert Labate, co-chair of Holland & Knight’s Sports and Entertainment practice.  Robert represents entertainment, media and advertising clients across the country that produce, license, acquire, use and invest in film, television, theater, music and digital content for worldwide distribution.  Holland & Knight has a global presence – with 21 offices across the U.S. as well as Bogotá and Mexico City – and provides legal services in almost every aspect of intellectual property, business, real estate, governmental law and litigation.

What inspired you to want to handle entertainment law issues? What were you doing before your current practice?

Early in my career, I was fortunate to join a boutique bankruptcy firm that handled national cases, and this experience allowed me to be trained by excellent attorneys in a variety of corporate restructuring and litigation matters. They provided me with an opportunity to learn and develop financial analysis, negotiation and courtroom skills that I found transferred easily to an entertainment practice. Like corporate restructuring, the entertainment business is based on a combination of federal and state law, is practiced by a small group of attorneys, and requires precision and deal-making skills. Talent agencies, individual actors, and production and media companies became my clients, and based on those experiences, I began to write and then teach law school courses on Entertainment Law topics. Under the guidance of my superb editor, Lisa Comforty, I’ve written a book about film law specifically for film producers and lawyers who do not regularly practice in this area. The book is in the final stages of review and will be published later this year by Lawyers for The Creative Arts.

What are the benefits of investing in a film project? Why is it worthwhile?

First, some background: The 2014 Sundance Film Festival received more than 4,000 entries – produced at an estimated total cost of $3 billion – with the festival accepting only 117 feature films. That’s a 3-percent acceptance rate; you have a better chance of being accepted into Harvard Business School. Fewer than half of those 117 films received a theatrical distribution deal, and many that did will receive no advance from the distributor. The New York Times projected a total box office return of $100 million for all 2014 Sundance films. Those are very long odds, and even experienced filmmakers with nationwide distribution are fortunate to recover their expenses, let alone make money for investors. Investors in independent film are unlikely to recover their initial investment, let alone profits, even when the film contains name actors, a known director and a first-rate screenwriter. But most investment is made for reasons that aren’t purely financial. Often the investor believes in the project, the producer or the actor, and is willing to risk loss of the investment to provide an opportunity for the film to be made. Large-budget films also have a poor track record (you can see the financial results of most feature films tracked on www.imdb.com) for providing a significant return to third-party investors. So, in that way, investing in film is like investing in a startup company. Most do not succeed but those that do can garner significant returns.

With respect to investing in film, what considerations should a potential investor take into account before getting involved in a project?

It would take a book to answer that question, but the first consideration is whether the producer is an experienced professional with a history of returning net revenue to investors. After that, an investor should determine whether the film has distribution agreements (or pre-sale agreements) in place, and the investor’s advisors should analyze whether the proposed distribution is likely to generate a significant return to investors who, depending on the investment documents, may be paid at the bottom of the revenue waterfall. By “waterfall,” I mean that the net revenues returned by exhibitors are paid in full to entities that are higher up on the waterfall such as: a bridge loan; CAM fees; marketing and distribution expenses; residuals to various guilds; and various deferments to talent agencies, distributors, director, writer(s), producers and actors. Potential investors should also pay attention to soft-money sources, such as tax credits or direct grants, that may be used to fund the film’s production and whether such soft money will be used to repay investors. In most cases, the film investor has no control over the production and distribution of the film. Take note that domestic box office numbers do not necessarily correlate to a return to investors and that films with great press and great talent still may not produce significant net revenue. Most films lose money, which explains why studios depend on summer blockbuster films to produce the bulk of their annual revenue.

What trends are you seeing within the industry that potential investors should take note of?

This is an extraordinary time for independent producers because there are many new ways to distribute and exploit creative content via the Internet and other forms of digital distribution. Yet, the competition has never been greater because traditional sources of revenue – such as DVD sales – are declining and fewer people are visiting their local cineplex. New and disruptive distribution channels and technologies are emerging, and not even industry executives are certain which will survive as dependable sources of revenue. A great deal of attention is being paid to crowdfunding websites, but other than as a source of marketing intelligence – that is, which projects are receiving significant support in advance of release – crowdfunding is a hit and (mainly) miss proposition. According to numbers released in early 2014, about 56 percent of Kickstarter projects had failed to reach their funding goals, and most projects have difficulty raising $10,000 for new projects or products. Keep in mind that, according to Kickstarter, the majority of donations come from friends and fans of each project. In 2012, Congress authorized “equity crowdfunding” (that is, crowdfunding investment in addition to crowdfunding donations) in Title III of the JOBS Act (Jumpstart Our Business Startups).  Eventually, crowdfunding investment will become regulated but, at this point, the Security and Exchange Commission has not issued crowdfunding investment rules. Until such rules are issued, it is unclear what a producer must do to completely protect herself from claims of disappointed investors. Stay tuned. Keep an eye on YouTube and similar websites that share a portion of advertising revenue with those who post video content. With enough viewership, video content can generate significant revenue but the ability of such sites to generate revenue for feature films is still unknown.

For more about Stephanie Strait, check out her LinkedIn profile.